Just because 1137 is mostly wrapped up, tested, and running strong doesn’t mean there isn’t a ton of other things to take care of. Waivers need signed, hotels need booked, Food needs purchased and prepped, spare parts need collected, the trailer needs packed. We have an awesome group of supporters who have been helping us stay organized and on top of everything. We got our entry fee paid, waivers signed and back to SCORE, and got our wristbands back in the mail already with a note from the SCORE registration person that said “You guys win the organized award!” 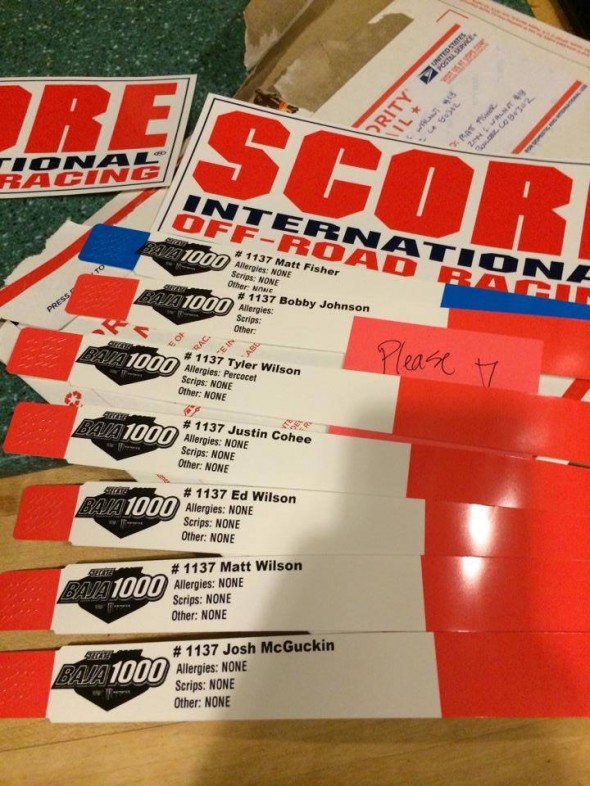 We’ve been working on lots of marketing schwag to give away (have you bought a t-shirt yet?) and the first of those things showed up: temporary tattoos! 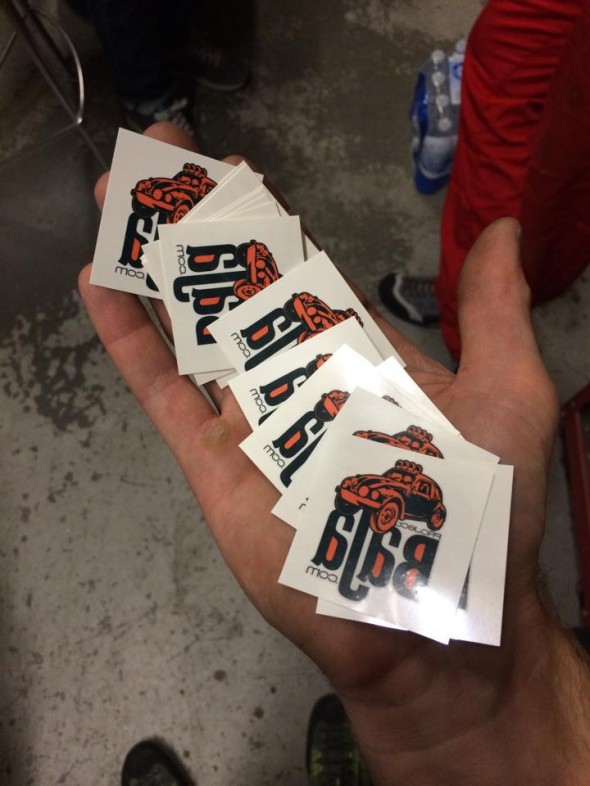 We’ve also had some help out from friends and family in the way of donations. We haven’t really pushed to get donations for a year or two, but one of the promises we made was that all the folks who donated to our team would have their name on the race car for the race. Well, it turned out we needed to fabricate a guard for the oil cooler fan and that makes a perfect spot for a list of names of people who have helped you out with a donation! The guard itself is made from aluminum, and looks super clean. It should protect the oil cooler fan and still let it move cool air, so that’s good. 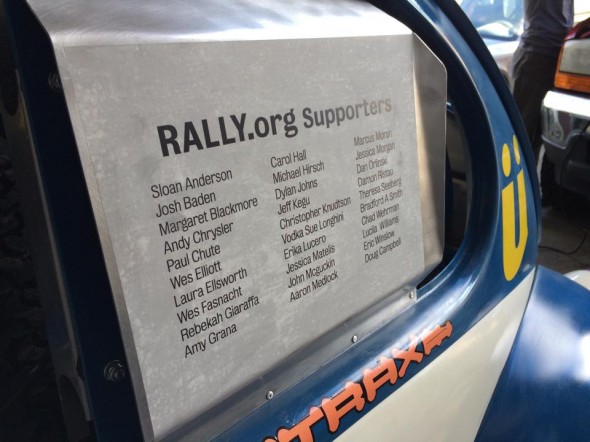 Tools and spares are critical, as is being able to carry what you need to fix the race car. We’ve been working on placement of all the tools and spares we’ll take with us, making everything secure and easy to access. Joe from J.Paks is working on a custom tool bag that will fit in the nose of the car, an oil container holster, and some net pockets for the doors to carry spares and tools. We’ll get pictures of those items when they’re complete. We’ve also been in love with an item called a quick fist for mounting stuff in the car. Here’s a spare CV axle held in place with a pair of quick fists, just below the 2nd spare tire: 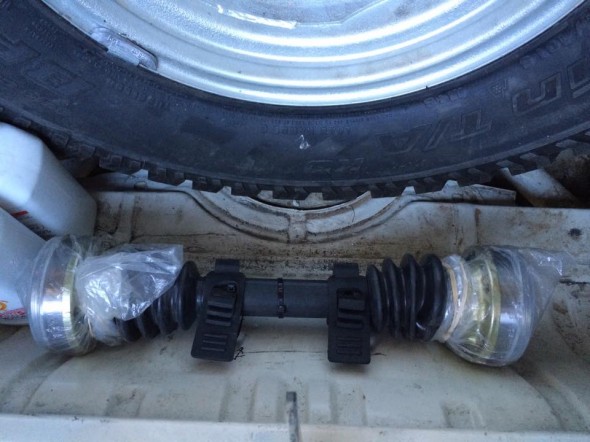 The jack handles are captured at one end with a metal “holster” and then the handle is secured on the other side by quick fists. The jack itself is held in place by a tab on the back wall of the car and a pull-pin quick release welded to the cage. Simple. These mount just under the 2nd spare tire, fairly easily accessed. 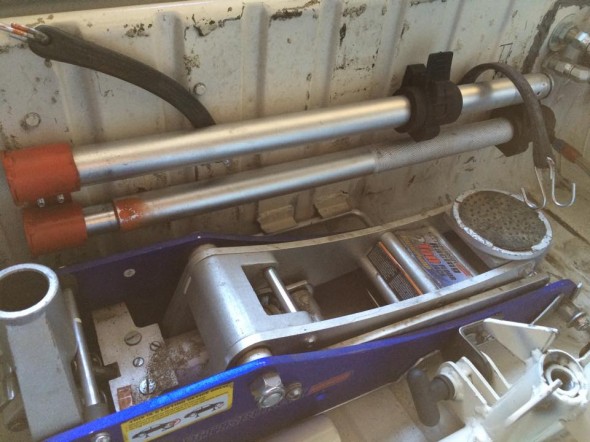 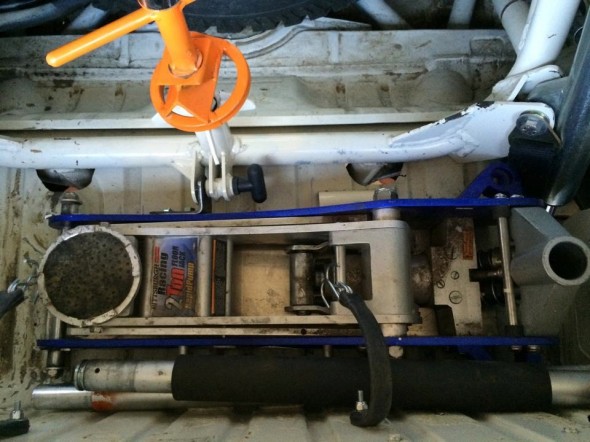 Another quick fist tool mount, this is the breaker bar for the wheel lugnuts. Position is just inside the co-drivers door near the A-pillar, easily accessed by the co-driver. 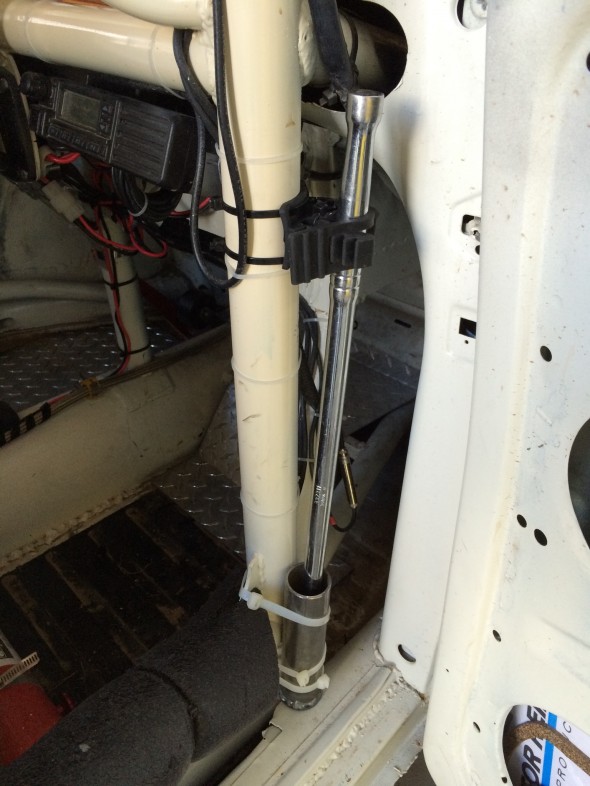 Gotta have our MAXTRAX handy! One end is held in place by the vertically mounted spare tire, the other end is secured with a couple of rubber bungees that have been bolted to the rear wall of the car. Double-sided hooks allow you to unstrap and strap the MAXTRAX easily even with gloves on. 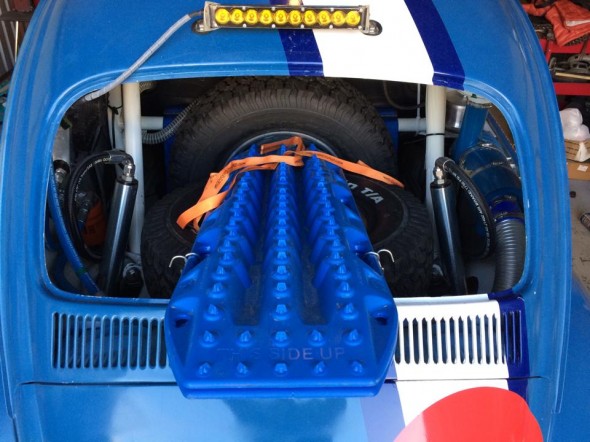 We had a lot of light bleed coming in to the cabin when the Baja Designs upper light bar was fired up and blazing. We figured this would be a distraction to the drivers, so we built a visor to keep it at bay. Other VW teams all have visors as well to help mitigate sun glare so this should help with that as well and not impede vision. 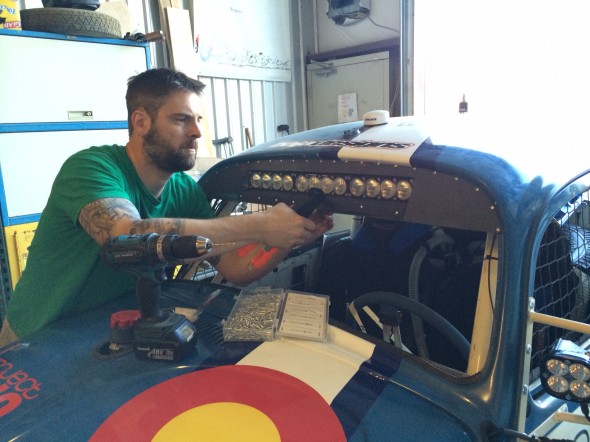 Less than 2 weeks before the race team ships out, and although it seems like there’s still a lot to do the list gets smaller every day. We’ll keep plugging away at it until the next thing you know… we’re eating tacos in La Paz.