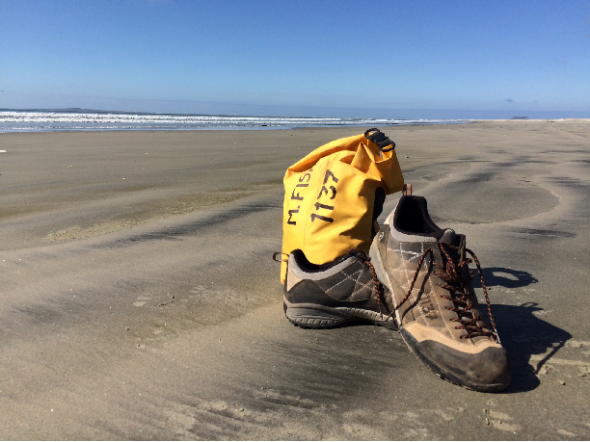 Some experiences are so big that it takes a while to grasp how truly big it actually was. Thisexperience fits in that category. Three and a half years ago when we hatched this crazy idea I had no way of knowing just how big it would end up being. What at first seemed like a simple-ish drive through the Baja desert (we had no delusions that it would be easy…) in a modest 1970 VW beetle became a hub for life long friendship and a wealth of knowledge and one hell of a set of stories.
Racing the Baja starts with friends. I knew Josh and Evan, but Matt was new to us. We quickly became quite a tight group. We had many setbacks and upsets that would have shattered a lesser set. I don’t know of another group that would have survived the trials of money, time and commitment we had along the way. Through the 4 core friends the rest fell into place. We met racers and family and other friends throughout the project and put together a great team of people. Without that eclectic group coming together to support this project it would have never left the garage in Colorado.
The grandeur of the Baja 1000 really hit me when we rolled into San Diego. Josh casually mentioned something like, “hey guys, we’ve been in the truck for 2 days, driven 1100 miles, had 5 meals and slept through an entire night in a hotel. We haven’t even gone as far as we need to go in the bug yet…” For me that put it in perspective. This was going to be a big deal.
Desert racers are the best people. We spent the next few days in San Diego working on the car and resting with friends from the BFG radio relay team. We met them in Colorado when Art Savedra was out checking the car. We were welcomed into their home like we had known them for years. We were visited by some San Diego friends who wanted to see what it was all about while we worked. It was great to see everyone and it was a perfect place to get the car settled in to its new altitude. Once we had it dialed in we may have taken it for a little ride in the city… But don’t tell anyone.
From there it was on to Mexico! We woke up early and breezed through the border. We passed through Tijuana without stopping and aimed the truck south. Driving the coast was beautiful, full of colorful taco shops and little towns backdropped by the Pacific Ocean. We rolled through the countryside and down into Ensenada, which was bustling with race energy already. We passed through and went to our accommodation. We stayed in a tiny quiet cabin chopped into the side of a hill 40 minutes south of town. It was a perfect place to relax and get out the race books and study. We studied and planned and plotted. We sewed, we ate, we learned and we had a few Tecates.

Contingency was something I had heard a lot about from experienced people, and I was really looking forward to it. I knew it was going to be a zoo but just how much of a crazy scene it actually is, one can not know unless you have been there and done it.
It is a strange thing; being a hero. People pressed against each other, pushing for a chance at a sticker and your autograph. Everyone around wants your autograph. We arrived in the contingency line around 7 am and left sometime around 5 pm and did not stop signing cards, shirts and skin the whole time.
Many hours and countless sharpies later we finally reached the tech inspection area where the crowd was kept at bay by fences and guards. Time to get down to business, or so I thought. We had had our car inspected by Art in Colorado already. He was there and in charge of the inspection so it went really smoothly. We shared some stories, got some great recommendations from Art on where to go out in town, had our trackers installed and checked and got our helmet stickers. Matt W jumped into the car fired it up and rolled off. Just like that it was done. The team gathered together and headed back to the house for dinner and final inspection and adjusting of the car. Tomorrow was the big day.

For almost 4 years we had come together on Tuesday nights and many weekends. For 4 years we had been working on the car. We tore it down to absolutely nothing and rebuilt it like drill sergeants would a soldier. We took that stock VW beetle, a daily driver, and made it into a warrior. Now it was time to put it to the ultimate test.
We didn’t start until early afternoon so it was a relatively relaxed morning of getting dressed in the race gear and driving the car into Ensenada. We got a final fuel up and signed a few more autographs and took pictures at the gas station on the way. Matt W and I met up with the rest of the team and headed off to queue up for the main event. The line moved quickly and through a flurry of signing autographs and meeting the other class drivers we worked our way through town again.
Finally we got to the point when we had to strap in and hook up. It was time to drive. I finally felt comfortable. There was nothing but the car and the course. No more mobs, no more signing, no more waiting. We rolled over the ceremonial dirt mound in the street and right up to the line. There it was, the green flag that signifies the start of the Baja 1000. Right there, right in front of me. I shook the race directors hand and turned to watch the flag. “Are you ready for this?” I asked Matt. “Because it is about to happen. We are really doing this!”
The flag flipped up, I gunned it, let off the clutch and we were off! The blur of orange fence and cheering faces along the course was impressive and endless. There were so many people. I could tell that they were cheering and yelling by their expressions, but through the roar of the car and the helmets I could not hear them. I was in a tunnel and all I could see was the course in front of me and all I could hear was Matt. I felt the focus, the kind I had not really felt since my mountain bike racing days. It felt good.
We roared into the iconic arroyo that cuts through Ensenada and pinned it! It was straight and fast with a few showboat jumps built by the race as well as one hell of a mud pit built by the spectators. We came up to that pit and there was nowhere to go. I tried to skirt the edge a bit to keep out of the really deep part, which was successful, but ended up hooking the left wheels in some deeper stuff. The car pulled hard left into the soft surface and we were going sideways through the mud. After a few swaps and a little berm ride on the far side of the course I pulled it into 2nd gear, gunned it and got us back up to speed. That was a close one, but it gave me confidence and let me relax a little more. 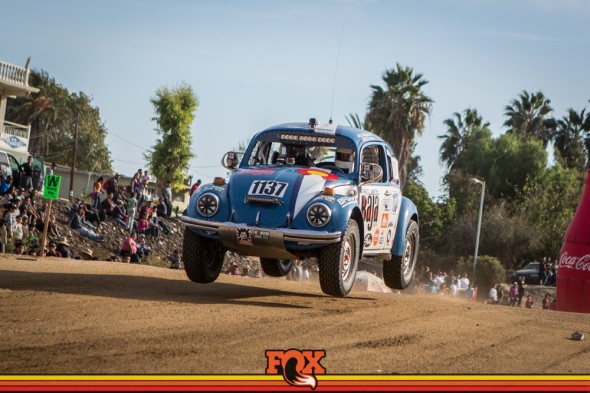